Given the money involved in the New Voter Registration and ID project, it would have been best to make a completely new voters' register 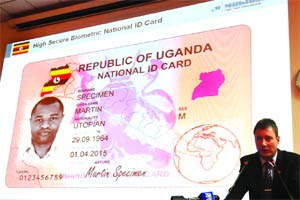 The ID card will be made of polycarbonate (plastic) material. It will have as visible features a picture of the card holder, a signature, date of birth, sex, card number, date of expiry, a thumb print and the national flag with the map of Uganda.

It will have additional invisible features, such as tribe, clan, village, parish, district, details of spouses, with provision of up to four wives, and children.

The sh185b project will first cover the new voters for the 2011 general elections, estimated at 3.5 million people. They are supposed to get their ID cards by October this year.

Under the second phase, Ugandans who are already on the voters’ list, a total of 10.5 million, will have their bio-data updated.

They are expected to get their ID cards in the next two years.
The German firm yesterday kick-started the training of 450 trainers who will in turn train 8,000 operators to carry out the voter registration at parish level.

However, Mühlbauer Technology Group did not respond to media reports which claimed that the price of the project was highly inflated.

The Observer yesterday quoted similar projects in neighbouring Kenya and Tanzania which cost sh53b and sh41b respectively although they have larger populations.

Questions have also been raised about the procurement process. A tender for the ID cards project in 2005 was cancelled by the IGG due to irregularities and corruption.

The three bidders were South African Face Technologies, Indian Contec Global and an Israel company called Supercom. Mühlbauer Technology Group was not one of the bidders.

However, the commission did not follow this advice and abandoned the tendering process altogether.

Last month, the Ministry of Internal Affairs signed a contract with Mühlbauer for not only the ID cards but also the bio-metric voter registration system.

A third concern raised is about the type of ID card, which uses barcode technology.

The East African Community secretariat as far back as 2008 advised Uganda to abandon that type of technology because it was unsuitable and not compatible with other countries in the region.

“The experts advised Uganda to use the smart card technology which Tanzania has opted for,” said Monique Mukaruliza, the chairperson of the EAC council of ministers, during a session of the EAC Parliament in December 2008.

The smartcard technology uses a chip instead of a barcode. A chip can accommodate a lot more information, such as medical records, criminal records, educational data, driving permits and social security data.
It can also authenticate fingerprints and photographs, which are additional safeguards against forgeries.

“A smartcard is critical for e-government,” an expert told The New Vision.

“You present your card to a hospital and it shows your blood group, medical history, the treatment you are on or the medicines you are allergic to.

“It can also contain A’level and O’level results or the schools somebody attended.”

Asked for a reaction last week, internal affairs minister Kirunda Kivejinja, also the chairman of the security committee handling the project, declined to give details, arguing that the national identification project was a matter of national security.

“This is a national security matter I don’t have to discuss with the press,” he said.

He added that the deal would not be presented before Parliament as some MPs had demanded.

The Inter-Party Cooperation, a coalition of FDC, the Conservative Party, the Uganda People's Congress and Jeema last month proposed electoral reforms.
In the proposals presented to Speaker Edward Ssekandi, the coalition called for the restoration of the presidential term limits, the disbanding of the Electoral Commission and prohibition of involvement of the army and other security agencies in elections.

The coalition also called for new rules to ensure accountability and transparency in casting, counting and tallying votes and announcing results.

In the second part of the report tomorrow, read about the NRM plot to kick out EC Secretary Sam Rwakoojo on claims of corruption and conflict of interest.
Posted by williamkituuka.com at 12:42 AM