With Dr. Otuunu, we now have a bull in Uganda's kraal 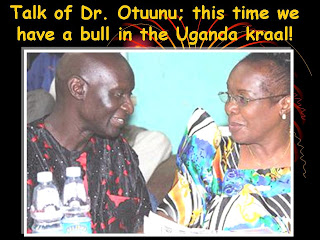 The President of the Uganda People’s Congress, Mr Olara Otunnu has petitioned the Constitutional Court challenging the police summons and some sections of the law under which police intend to charges him.

Details indicate that the former diplomat is seeking legal interpretation on whether police has powers to summon him to make a statement before President Museveni, alleging defamation, records a statement as a complainant.

Mr Otunnu’s lawyer, Mr Erias Lukwago confirmed yesterday that he and a group of lawyers filed the petition at the Constitutional Court on Friday challenging the summons to Mr Otunnu over what they called “flimsy grounds”.

“To us the conduct of police is unconstitutional. We are also challenging the constitutionality of section 179 of the Penal Code Act which talks about criminal libel and defamation and section 27(a) of the Police Act which is being used by the police to summon people on flimsy grounds,” Mr Lukwago told Daily Monitor on phone yesterday.

Mr Otunnu was summoned to appear at the Criminal Investigations Department (CID) over remarks he made against President Museveni that he aided the war in northern Uganda but he did not show up.

He said they want the court to interpret whether statements made against President Museveni qualify to be called criminal.


Uganda's President Yoweri K. Museveni, has unleashed the police force in the East African country to hound a prospective Presidential candidate Olara Otunnu, a former United Nations Under Secretary General, when he should be worried about the still unresolved war crimes allegedly committed by his troops in Congo.

When Otunnu returned to Uganda last August after nearly a quarter century in exile -- General Museveni has been president during the entire period -- within a few months, he was almost dead. On December 21, 2009 Otunnu’s vehicle reportedly was run off a main road by a unit of soldiers with Gen. Museveni's Presidential Guard Brigade (PGB), a private army reported at 12,000 strong and paid for with tax-payer money -- some of it undoubtedly part of the donor aid received from the U.S. and European Union.

Otunnu survived what he referred to as an "assassination" attempt, which also caught the attention of Gen. Museveni's main foreign sponsors. U.S. Senator Patrick Leahy and the U.S. State Department have called for an investigation. To
date, there has been no formal response by the Ugandan government, which claims Otunnu’s driver hit an anthill, causing the suspicious event.

Recently, Ugandan police -- who, like the national army, and the PGB -- are also used by the president as his private armed forces, served Otunnu with a summons for interrogation at police headquarters in Kampala.

Otunnu had given an interview on Lango Radio in which he implicated Gen. Museveni in collaborating with the vicious Lord's Resistance Army (LRA), whose brutal war with the Ugandan army under Gen. Museveni caused massive suffering to civilians, especially in the Acholi region of Uganda.

Police issued the summons after Gen. Museveni personally called and complained to the owner of the radio station for hosting Otunnu. The owner was compelled to apologize--naturally--for his safety and that of his business.

The police criminal investigation department first wanted to question Otunnu for alleged "libel" committed against Gen. Museveni. When the former UN diplomat pointed out that the constitution didn't allow for such charges and that in any case there was no printed statement on which to base the libel charges, embarrassed government officials went back to the drawing board. Now Otunnu is accused of promoting "sectarianism."

This is almost laughable were it not so tragic. Accusations of "sectarianism" coming from a man whose regime locked up nearly 2 million civilians --exclusively from the ethnic groups in the northern part of Uganda-- in concentration camps, purportedly to protect them from the brutal LRA, but where instead, as many as one million may have perished through hunger, dehydration, and treatable diseases over a 15 year period through Gen. Museveni's policy of planned neglect.

Gen. Museveni's media bullying is of course completely counter to a directive issued by the U.S. Congress to Secretary of State Hillary Clinton in December to monitor the preparation for Uganda's 2011 presidential elections, the elections itself, and the aftermath. In addition to safety of candidates, a credible election registry, an independent election commission, and counting of votes at polling stations, it calls for freedom of press and media access for candidates. It's an important directive because without U.S. support the Ugandan dictator wouldn't survive.

If the ICC would do it's job, Gen. Museveni would no longer be tormenting Ugandans--ironically, not even due to the alleged crimes in Uganda, but by taking action with respect to atrocities committed by Uganda's army during its occupation of eastern Congo between 1997 to 2003.

Indeed, in 2005 the International Court of Justice (ICJ) ruled in favor of Congo --after President Joseph Kabila's government referred the matter to the court-- with respects to the destruction, the theft, the rapes, and the murders of Congolese civilians by Gen. Museveni's troops and militias he armed, trained and financed. The Court consented to Congo's request for $10 billion in compensation, which Gen. Museveni's government has yet to pay.
(See: http://www.icj-cij.org/docket/files/116/10455.pdf)

More seriously, the International Criminal Court (ICC), which determines criminal liability by individuals, then launched its own investigation into the atrocities committed during the occupation by Museveni's army. The court had agreed that the atrocities amounted to crimes against humanity, according to a front-page story June 8, 2006 in The Wall Street Journal.

Naturally, Gen. Museveni was worried, since he knew the likelihood of being indicted; the Wall Street Journal reported: "President Museveni of Uganda asked U.N. Secretary-General Kofi Annan to block the Congo investigation, according to one person familiar with the matter. Mr. Annan replied that he had no power to interfere with the court, this person said."

When Otunnu was in New York, The Black Star News in a lengthy interview raised the issue of the alleged crimes committed during Uganda's occupation of parts of Congo. Excerpts of the interview which can also be viewed online follows:
(See: http://www.youtube.com/watch?v=R6dQFzYV4eo)

Otunnu noted that unlike the ICJ which adjudicates disputes between nations, the ICC deals with individuals "accused of having committed crimes," such as "crimes of war," "crimes against humanity, genocide and so on."

He noted that two of the first people to appear before the International Criminal Court, Congolese warlords, Thomas Lubanga and Jean Pierre Bemba were both "trained and financed" by Museveni.

"I met Mr. Bemba in the Congo presiding with the most repressive system over a huge swath of eastern Congo," Otunnu said. "And the line of supply, the line of training, the route through which the loot were being sent out, was Uganda. So that's interesting in itself."

The ball is clearly in Luis Moreno Ocampo's court. He's the ICC prosecutor.


Please post your comments directly online or submit tomilton@blackstarnews.com
Posted by williamkituuka.com at 1:44 AM