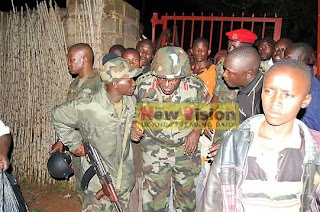 Lieutenant General Edward Katumba Wamala
President Yoweri Museveni has started his campaign for the 2011 elections with a national tour; however, he faces a more coherent opposition and will have to fight for the support of the influential Baganda people. Some article says, “The most serious challenge to Yoweri Museveni's Presidency was always going to come from within his own coalition and that seems to have started in Kampala . A dispute between Museveni and Kabaka Ronald Muwenda Mutebi, the titular King of Uganda's largest ethnic group, the Baganda, sparked off riots on 10-12 September 2009 during which more than 20 people were shot dead. The riots erupted after the government blocked King Ronnie's visit to a district of Kayunga which is part of his Kingdom. The consequences are likely to be far-reaching. The most obvious one is that President Museveni would struggle to win a free election without substantial support from the Baganda.”

Given the above position, the best NRM can do is to come up with another candidate for President. Yes, President Museveni may see himself as the most capable/qualified but the fact is that the administration has made a lot of political blunders such that as of now, chances of getting over 50% are not there in a free and fair contest! It is also true that people out there are waiting to see a change, and what is likely to fail the change is a big number of Presidential candidates which may give the incumbent opportunity to get a higher percentage hence calling for a re – run which NRM may have to win at all cost.

The man who could overturn NRM’s mistakes is Lt. General Edward Katumba Wamala. This officer is greatly seen as one with integrity and with a good campaign, chances are that he can change NRM’s fortunes and he could even make it above 50% in votes! So, if NRM wants to see a peaceful country, relying much on rigging may slowly but steadily reverse some of the achievements some people are proud to talk about.

Willy Kituuka
Posted by williamkituuka.com at 4:21 AM