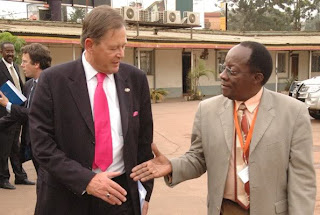 Engineer Badru Kiggundu on the right 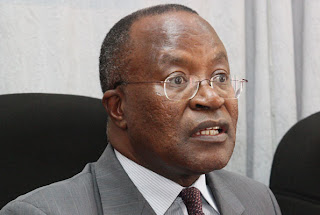 Justice Kanyeihamba
Electoral Commission Chairman – Engineer Badru Kiggundu is demanding for more money for the forthcoming General elections. He says that for each newly created district shs 500m is needed for each of the 10 new districts; which Government endorsed recently. It is absurd that NRM’s wish to have more numbers in Parliament is causing the Uganda tax payer astronomical amounts of money. This is corruption which is deep rooted within the NRM! While that is said, Bushenyi district is to be sub – divided and an additional 4 or so districts added to what Kiggundu is demanding. And, Bushenyi is NRM’s strong hold.

It can be remembers from the time of the Constituency Assembly that the NRM Government made the formula through numbers such that whatever they wanted to be passed, the numbers were just in their favour. For how long we are to go on like this, it is anybody’s guess.

Outspoken Prof. Kanyeihamba said the most corrupt people in Uganda, according to media and other reports, seem to be those closest to the President.

He was addressing this year’s symposium of the 2nd Annual Rule of Law Day last week.
“The retention or recycling of the same individuals in Cabinet and other government departments often in the same portfolios for longer periods can only mean that only those same individuals take the lion’s share of the national wealth,” he charged.

Because of corruption, everything has been messed up in the country, including Kampala City planning where it is not uncommon to find buildings constructed on road reserves, Kanyeihamba went on. The retiring Supreme Court judge told his audience that he is competent to talk about planning issues because he holds a doctorate in Development Planning.

His hour-long presentation laced with humour captivated an audience largely comprising lawyers. It also drew a standing ovation from other co-presenters: Norbert Mao, the Gulu LC-V chairman, and Miria Matembe, former Minister of Ethics. “The best person to fight corruption is the employer himself.

Museveni’s promises to begin fighting corruption are meaningless if he is not seen to actually weed out corrupt officials from his government,” Kanyeihamba said as he presented his 23-page paper titled, ‘The State of the rule of law in Uganda: Emerging Patterns’.

The plain-speaking judge, who served in President Museveni’s government as Attorney General, among other portfolios in the 1990s, said that if he came face-to-face with the President, he would kneel down and tell him politely but frankly that he had failed to stem corruption.

Museveni had been expected to deliver a key note address at the symposium but he delegated this task to Khiddu Makubuya, the Attorney General. Kanyeihamba applauded the media for exposing corrupt officials and asked civil society organisations to critique government and not just look on as things fall apart.

Commenting on the Judiciary, Kanyeihamba caused laughter when he said most African governments take independence of the Judiciary to mean that judges are not supposed to share the same premises with other government organs.

Yet in essence, he said, it means that the Judiciary must act without interference from other organs, and that judicial officers must not fear to talk about the wrongs in society. He claimed that several judges share his critical views but are afraid to come out in the open like he does.

Makubuya defended the government’s record as far as fighting corruption and maintaining the rule of law are concerned.
“The teaching of patriotism in schools, education, health and prosperity for all, as well as good roads, railways and ICT systems are all evidence of government’s commitment to protect the rule of law it restored, and fight corruption,” he said as the audience, for unclear reasons, burst into laughter.

He said rule of law is the cornerstone of NRM’s vision of transforming Uganda socially, economically and politically. Earlier, Norbert Mao while discussing Kanyeihamba’s paper, said that the rule of law is not only violated when the Black Mamba invade the High Court but also when lawyers bribe court clerks to strike affidavits off case files.