Ken Lukyamuzi is in a mess over the Parliamentary seat 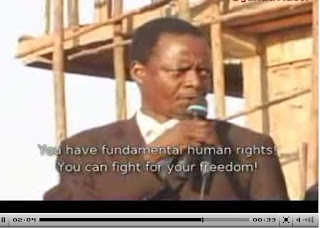 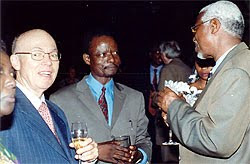 Why doesn’t Lukyamuzi try standing at home in Masaka? I thought he is popular that end. This matter was clear from the word go, and Lukyamuzi could not see it! He left the seat for the daughter, and now he is claiming the seat; it is absurd! The conflict could lead to complete loss as the electorate may decide otherwise.

Despite several meetings, the sources told us, Lukyamuzi, the former occupant of the seat, and Nampijja, the incumbent, seem to have failed to agree on the matter.
But Lukyamuzi told us that he had not developed any political differences with his daughter.
“I campaigned for her. I take pride in her success and there is no rift between the two of us,” he said last week. The disagreement – which for four years had been a well kept family secret – spilled over


into the public domain last week after Nampijja asserted that she was elected in 2006 in her own right and not because she is Lukyamuzi’s daughter.
“You did not send me to keep Lukyamuzi’s place. I was elected by you to represent you. I am not anybody’s shadow,” Nampijja said during a public rally at Nateete last week.
The rally was organised to celebrate Lukyamuzi’s recent victory in the Supreme Court. The matter seems to have gained a new sense of urgency in the wake of Lukyamuzi’s legal victory which overturned the decision by the IGG to dismiss him from the Seventh Parliament because he had not submitted his wealth/assets declaration form, contrary to the Leadership Code Act.
However, even if court had not ruled in his favour, Lukyamuzi would have been eligible to stand in 2011 after serving the five-year suspension.

Having been in the cold for the last four years, Lukyamuzi now wants to regain the parliamentary platform that gave him the political clout he wields today. In fact, he has already printed posters with the message, “Vote Lukyamuzi Rubaga South” although they do not stipulate the election year.
Sources in the CP have told us that the debate – as to whether Nampijja should step down for the father after serving her term – started almost as soon as she made it to the Eighth Parliament.
In fact, Lukyamuzi, who played a pivotal role in Nampijja’s 2006 victory, told us that his daughter, through an affidavit, had pledged to step down if he won the court case. But this option now looks unlikely, he admitted.
While campaigning for his daughter, Lukyamuzi often told the electorate that she was the right person for the constituency because she would keep the seat until he returned. But all this seems to have changed as Nampijja, emboldened by the little political experience acquired in Parliament, appears unwilling to withdraw into political oblivion.
Her performance in the House has been mixed. In the early years, her sharp and dramatic contributions on the floor evoked memories of her father, leading MPs to christen her “the woman.” Lukyamumizi is fondly known as “the man.” But lately, she has faded out.

According to our sources, the recent discussions have centered on how to resolve this impasse and come up with a win-win position. Some party members are of the view that in order for CP to extend its influence in Rubaga, Lukyamuzi should contest for the Rubaga North seat, held by Beti Kamya, who was expelled from FDC last week.
The argument is that he is quite popular across the division, unlike his daughter. Lukyamuzi told us that this would not work for him. A source suggested that he fears to sour his relationship with Kamya.
Others have suggested that he goes to Kyotera, Rakai District, represented by NRM’s Lt. Pius Mujuzi or Masaka Municipality, represented by DP’s John Kawanga.
“I think the people of Rubaga South need my services most. They know what I can do for them,” he said, brushing aside the other suggestions.
There’s also a suggestion that Nampijja vies for the Kampala Woman seat, currently occupied by FDC’s Nabillah Ssempala.
Lukyamuzi told us: “We can talk to the FDC and reach a compromise of supporting our candidate.”
He added that his daughter will build on Rubaga South as a springboard to get votes in other parts of Kampala.
Nampijja remained non-committal when asked about this possibility. Some opposition politicians who graced the Nateete rally praised Lukyamuzi but at the same time acknowledged Nampijja’s contribution – as they tried not to drive a wedge between father and daughter.
“We miss you very much and we cannot wait for you to come back,” said Makindye East MP, Michael Mabikke. “In your absence Nampijja has performed well.”