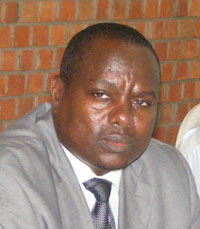 It does not make sense for a witness to come and tell court that they wanted to buy land hence in their stupidity deposited money with the former Chief Executive of NFA. The court cannot just take such rubbish. The source of the money MUST be established. In fact the woman to have taken a bit of it as alleged is a big opportunity to start serious work to establish the source of the money. Money simply does not grow on trees.

A whopping Shs 900 million in cash under the pillow, in the mattress cover or somewhere in a wardrobe in the master bedroom! Wherever National Forestry Authority (NFA) executive director, Damian Akankwasa, kept his money, the revelation last week that his wife Juliet Katusiime could have stolen it has raised more questions than sympathy for him at the colossal loss.

Why would anyone keep such big amount of money in the house? Where did he get it from? What does he do to earn such money?

Akankawasa was hitherto not known to be one of the rich people in Uganda. He joined the NFA two and a half years ago after working at the Uganda Wildlife Authority (UWA) where he was the director of tourism. While at UWA, Akankwasa was earning Shs 2 million as gross salary.

At the NFA he bags Shs 14 million gross salary in addition to Shs 1 million entertainment allowance per year. He is also entitled to US $2,000 in house rent per month. He however moved out of the official NFA rented house and had the board approve for him a two-year rent advance in cash that totalled to $48,000 (Shs 91.2 million at the exchange rate of 1900).

With a net official salary of about Shs 8 million, it would take Akankwasa at least 10 years to accumulate the Shs 900 million that he lost, and that assumes he does not touch a single cent of it. Clearly, it is not possible that Akankwasa had saved this money because he has to eat and fend for his family, and he has not completed three years at NFA, having joined in June 2007. This money could therefore only have been accumulated through business transactions, or corruptly using his position as head of NFA.
In an interview with The Independent, Akankwasa’s wife Juliet said she had never seen the sum of Shs 900 million in their house though her husband regularly came in with money. She said the biggest amount she ever saw was about Shs 20 million which her husband brought in one time for purchasing construction materials. She however admitted regularly seeing receipts in the house with huge amounts of between Shs 100 million to Shs 400 million for purchase of assorted construction materials like cement, iron bars, etc from Hardware World and timber from NFA auction yard. But all the receipts were always in the names of Akankwasa’s nephew Matia Agaba, who also is his official driver.

Given the above, there is no doubt that Akankwasa had access to big money. Therefore his claims that he had that amount of money are not far fetched or just a fabrication as his wife insists. This is reinforced by the fact that he is building a hotel worth about US $2 million in Naguru, Kampala, and has already completed another hotel in Kabuyanda, Isingiro district. But the Naguru hotel and other unspecified properties around the city including land in Kawempe are in Matia Agaba’s names, sources say.

So what is the source of Akankwasa’s fortune?

According to former coordinator of law enforcement at the NFA, retired Lt Samwiri Rwabwogo, Akankwasa could have gotten the money from under-declaring the amount of timber harvested in the forests and from the sale of land at NFA headquarters at Nakawa.

Other sources in NFA too indicated that Akankwasa might have made his money from bribes to lease out forest reserves and from buying timber from NFA yard and selling it to mainstream timber dealers at a higher price. They said there have been several scams involving top officials at NFA and within the Ministry of Water and Environment.

One of the scams, sources say, revolves around the leasing of the 800-hectares of Katugo Central Forest Reserve in Nakasongola in 2007. Apparently, NFA in 2006 advertised for bids to harvest the pine trees and replant the forest reserve. New Forest Company emerged the highest bidder offering US $13 million (about Shs 25 billion) while M/s Nile Plywood offered US $9.5 million (about Shs 18 billion). The bids were however cancelled ostensibly because they were perceived to have been marred with political interference and lack of transparency.

But in a sudden twist, and without calling for fresh bids, Nile Plywood was a year later in 2007 hand-picked and given the lease to harvest the forest for only Shs 6.25 billion. This was Shs 19 billion below the New Forest Company’s offer, and Shs 12 billion below Nile Plywood’s original offer! And what’s more, NFA’s pricing committee was reportedly not invited to agree on the price of the concession offered. Who took the difference of the money? Who authorised this reap-off of public resources, and what was the motive?

Another scam from which billions of shillings could have changed hands involves the leasing of part of Nakawa Central Forest Reserve which houses NFA headquarters, to Ms Virco Holdings Ltd in July 2008.

According to our sources, Virco Holdings was on July 21, 2008 granted a lease and licence to establish a timber drying plant and modern artisan training centre on one hectare of land. The company was required to pay Shs 400 million in two installments and Shs10 million in ground rent for 49 years.

The Virco licence was issued in total disregard of public procurement and disposal rules requiring public advertisement and competitive bidding. As a result, NFA lost the opportunity to get better offers and given that the going rate for land around Bugolobi is around Shs 1 billion per acre, and there are 2.47 acres in a hectare, then at least Shs 2 billion could have been lost in this transaction. Who benefited?

But besides the money, the Virco deal was marred by lots of controversies. One, the lease was reportedly backdated by a month from August 21, 2008 when the deal was actually finalised to July 21, 2008 because President Yoweri Museveni had on July 29 issued an executive order suspending issuing of permits and licences for forest reserves on account of alleged corruption in NFA. The legal officer, Silverio Mwesigwa, reportedly refused to sign on the lease instrument which was instead signed by his junior who was apparently on leave.

In an interview with The Independent early this year, Akankwasa explained how Virco Holdings got the licence.

“Virco had applied to State Minister Maria Mutagamba to use this land. She forwarded the application to the executive director at the time. These things started before I joined this office in June 2007. I found the application here.”

Interestingly, Mutagamba, the Minister for Water and Environment, had a different story: “That company was sent to me by NFA. They initially had gone to the authority for the land. They were told to write to me. When I read their proposal, I thought it was a good innovation so I sent the letter to the executive director. The board evaluated his proposal and gave him the licence.”

To ensure that the land was handed over as scheduled on December 8, Mutagamba under whose docket NFA falls, wrote to Akankwasa advising him to go ahead since she had briefed the President and she had subsequently been guided that his [president’s] executive ban “did not cover projects aimed at adding value to forestry products” and that the project “would enable Ugandans to become job creators in the wood industry”.

Consequently, Mwesigwa resigned on December 10, 2008, two days after Virco was handed the yard.

When asked what he knew about the investors, Akankwasa said: “I only know one of the directors called Virani.” Efforts to find out more about Virco Holdings were fruitless. At the registry of companies, Virco Holdings’ documents could not be traced. At NFA, the executive director could not provide The Independent with supporting documentation of the contract between NFA and Virco.

Uganda’s forest reserves are in danger. Over the last three years, NFA has helplessly watched, without major action on its part, as forest reserves are depleted by unscrupulous individuals whose sole aim is private profit. The national forest cover has halved in the last two decades. According to John Diisi, NFA’s coordinator for Global Information Systems and Mapping, Uganda’s forest cover is now lower than 13%.

“In the ‘80s, about 26% of this country was covered by forests. Now we will be lucky if it exceeds 13%. At least 2% is lost yearly and nothing is replaced.” he told journalists. “The future is not good.”

A breed of rich, mighty, well placed and influential people has turned their attention to these reserves and will stop at nothing to enjoy its every diminishing resource. A few months ago, two NFA officials Alfred Ezaaki and Emmanuel Asiimwe were brutally murdered as they tried to stop individuals from illegally harvesting trees in a forest reserve in Masaka.

There have also been several cases that constitute conflict of interest. These include NFA boss Akankwasa allegedly buying timber from the yard in the names of his nephew and driver Matia Agaba, and Sarah Nkonge Muwonge, a board member being issued authority to harvest trees on private land in Bugoma, Buyovu and Bukasa in Kalangala using chain saws that are by policy banned. In the process, unscrupulous dealers photocopied Nkonge’s authorisation letter and used it to harvest large swathes of trees in Kalangala.

The remaining part of Nakawa Central Forest reserve has also been partitioned into prime plots and one of the plots has already been authorised for issuance to a one Dick Olet, a former commissioner for forestry.

The board’s handling of the Shs 900 million saga involving Akankwasa is instructive. After a meeting on Friday, October 16, to discuss the circumstances surrounding the incident, Baguma Isoke is quoted in the media saying that NFA perceived the matter as domestic and in his view, the money was not stolen from the Forestry Authority.

“If that dime had been ours we would have been the first to set an alarm,” Baguma-Isoke said.

But aren’t they bothered that their employee could have such huge sums of money in his bedroom?

NFA’s motto is ‘Forests for Prosperity’. Many Ugandans are beginning to think that perhaps the NFA board and management have decided to take motto rather personal.
Posted by williamkituuka.com at 3:17 AM