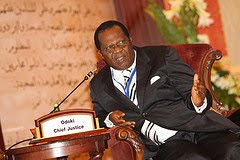 The voice of the people is that after the Movement Government has abused public funds under the cover that they fought, the better approach is the Federo arrangement that a number of people are calling for. If the NRM Government is not willing to listen to people who elected them to power; why think of wasting time and money on the Regional Tier? Just forget it. We don’t want. We are watching. Can you imagine putting off air a private radio station simply because of the sins of the state? If every Ugandan is free not only to move in Uganda but now even in East Africa; how does the state defend itself against a move that refused the King of Buganda to visit part of his Kingdom; hence the riots? The gambles are too many, but better not waste time on the Regional Tier. Pass it only if it is another eating avenue for the Movement, but will in no way improve the already poor governance as portrayed by the NRM.
William Kituuka

Wishing that the National Resistance Movement would simply ignore Ganda nationalism, is like wanting to eat matooke without steaming it first. Judging by his impassioned opinion piece (The Independent of August 7); this is something Matsiko wa Mucoori needs to learn. It is a dilemma borne of a profound misunderstanding of what the NRM is in relation to Buganda.
Mucoori asks: “why are we again in this power race between the central government and the Buganda establishment, which had been solved 42 years ago in 1967? Who is responsible for this?”

As a people whose lives were drastically changed by the events of 1966/1967 (with the state of emergency curfew, property seizures, illegal detentions, the missing dead, the insults and mocking by the “victors”), Baganda are always quite surprised to hear that those events were a “solution” to something. It is this attitude towards their suffering that in itself acts as a catalyst for Ganda nationalism.

As a result, as long as the crimes enshrined in the 1967 Constitutional arrangement – or any subsequent variations of it, such as the 1995 Constitution – remain imposed upon Buganda, then Uganda will never be at peace. To expect otherwise is wishful thinking.

Mucoori asks further: “how come it is only Buganda making loud noise about federo while the rest are quiet?”

A cross-party platform of MPs from northern Uganda recently demanded job quotas for northern Uganda (Independent May 22 cover story), this was accompanied by the explicit threat that their current inclusion in Uganda should not be taken for granted. “We are not dying to be Ugandans” were the words used.

In Bunyoro, the kingdom government is supporting the President’s proposals for a distinction to be made between Banyoro and non-Banyoro Ugandans, when it comes to planning for, and distributing Bunyoro’s land and resources, and that this should be underpinned by preservation of elective posts for Banyoro only.

These demands are in essence identical to the ones Buganda has made for a long time. At bottom, call for a renegotiation of the terms under which they would be willing to be included in the “Uganda Project”, as opposed to being forcibly herded into it according to (usually unfavourable) diktats from a committee of Generals controlling a central government. In short, these are demands for federation. Perhaps what our politics needs is to find another word to capture native demands other than the lugandanised “federo”. Then just maybe, the demand would be seen more clearly for what it is, instead of being a victim of a historical prejudice against anything perceived as a proposal from Buganda.

Besides, we all know from the report of Justice Benjamin Odoki’s Commission of Inquiry submitted to the Constitutional Assembly that support for a federation was found to be at well over 60% in Uganda as a whole. Why did Mucoori make absolutely no mention of this?

Mucoori gets it wrong again when he presents the current situation as being a result of a sudden act of political folly in 1993 created by Museveni’s alleged “populism”. Let us look at the relevant facts.

NRM/A did not exist at the time of the 1981 Tarehe Sita attack that is often cited as the kick-off for the “revolution”. That was a group that was to later name itself the Movement for the Struggle for Political Rights (MOSPOR), and later again the Popular Resistance Army (PRA).

In his war narrative “Sowing the Mustard Seed”, Museveni tells of a trip he made to Nairobi in 1982, accompanied by Pecos Kutesa, who confirms many of the details in his own book: “The 1979-1986 Revolution: The Way I Saw It”. They were going to see former president Yusuf Lule.
Many Baganda took the view that Lule’s April 1979 ouster from the post-Amin UNLF coalition government was just a first step by the UPC to take over the fragile coalition in preparation for an Obote return to power.


In politics and also often in war, perceptions often matter as much as actual realities. If people believe their interests or positions to be under threat, they will usually react as if they are actually under threat, and not “wait and see” if the threat is real or imagined. This action then creates new realities on the ground.

Accordingly, Baganda spontaneously formed networks of fighters opposed to all the post-Lule administrations, meaning that armed resistance to Obote began long before he even returned from his 9-year Tanzanian exile, following the Muwanga May 1980 coup against the UNLF coalition. Yusuf Lule was a symbolic leadership figure for some of them, and the actual leader of at least one group.

The subsequent usurping of the powers of the Electoral Commission by the Muwanga-headed military junta, which then declared the UPC the winner of the 1980 elections, only helped to cement the suspicion that all the post-Amin upheavals had been an Obote plot.

The PRA leadership found this reality on the ground when they also set up base in the central region in 1981, over a year after anti-Obote agitation had already begun. Given their background as UPC youth-wingers, their involvement in the ousting of Lule, and as participants in the Muwanga-headed Junta, gaining trust among Baganda was a challenge. They must be credited for handling the delicate political situation with some skill, however suspect their motives may have been.

Militarily attacking a political problem does not make it go away. Instead it may simply turn it in a more lethal and dangerous form of itself. The “Monarchy Problem” was never “solved” in 1967, as Mucoori imagines. It simply went underground, where others –like PRA- engaged in their own underground politics would find it.

Needing to show they were not opposed to the objectives of the Ganda federo militants, but were simply making the case for a “broader-based” resistance to Obote, PRA decided to hold talks with Lule.

Despite resenting Museveni for his ousting and strong opposition to the pro-Lule demonstrations that rocked Kampala shortly after, Lule now agreed to the creation of a new organisation: The National Resistance Movement and Army.

According to the researcher, Fred Guweddeko, above was the very first line up of its leadership, showing how authority was shared between the two founding groups.

The key thing to note here is the clear attempt at a balance of power, on paper at least. We can leave aside for now what this could tell us about both men’s political principles but clearly, it was not friendship, but purely their respective political ambitions, that brought them together.
Guweddeko also tells us that by the end of the war, all the key UFF figures had died, some under questionable circumstances. Perhaps, this is how a “PRA” version of the Luwero-based (we should not forget that there was significant armed resistance elsewhere in the country) anti-Obote resistance origins became the dominant narrative.

If this is all true, then what Mucoori needs to understand is that if anything, it was the Ganda nationalist movement that returned “monarchies” to our politics by bringing the NRM into existence, and not the other way round, and all this drama is simply part of the still unfolding story of how the NRM will be held to its original goals.


Mucoori perhaps does not recall the widespread 1991-92 arrests and torture of Baganda accused of belonging to a new rebel movement called “Kiri mu ttu”? Given the NRM’s inside knowledge of Ganda militancy, as described above, he should recognise the 1993 Gulu High Command resolutions as an attempted pre-emption of a return to the 1979-1981 spontaneous militancy. It has not worked, as it is only part of the UFF agreement.

Any 1982-1993 NRM supporter also feeling Mucoori’s evident discomfort with Buganda’s demands, but unaware of the NRM’s origins, should really limit their anger to whoever misinformed them. Buganda is simply holding the Movement fully to its word, and should not be made scapegoats for the PRA leadership’s past opportunism, as Mucoori seeks to do.

More critically, it is most disingenuous for any NRM apologists to seek to demonise Buganda nationalism, while they continue enjoying the fruits of a war founded and waged on it.

Broken political promises cause political crises, and Uganda’s history is littered with them. One does not have to be a Mengo sympathiser to accept this fact. It happened when the British tried to force Buganda into an East African federation, contrary to the terms of the 1900 “Agreement”, leading to the 1953 deposing of Kabaka Mutesa II, which in turn resulted in a two-year period of civil disobedience. It happened when the Obote I UPC opened party branches in Buganda, contrary to the terms of the UPC-Kabaka Yekka Independence alliance, which contributed to its collapse, and the events of 1966.

It happened again when the political parties within the post-Amin UNLF coalition government chose to support Paulo Muwanga’s coup so as to collectively dodge the Individual Merit system agreed in the UNLF Moshi Accord for the 1980 elections, thereby giving Muwanga the opportunity to steal the election, leading to civil war. It also happened when the NRA signed the 1985 Nairobi Peace Accord, after six months of deliberate delays to build up their strength and then overthrow the very Okello government they had “agreed” with, thus sowing the seeds of the 20-year northern insurgency.

This is our history, and it is high time we stopped repeating it

Mucoori ends by lecturing Buganda on the need to become Ugandans. Professor Mamdani recently said something similar, arguing that Buganda must recognise that she is now “irrevocably part of Uganda, even if that was as a result of a forced marriage, or abduction”.

This is an old argument. Every head of the Ugandan state -from their Excellencies colonial Governors Colville to Cohen, to the African Governor-Presidents Excellencies”- has made it. Ultimately, it is the language and thinking of colonial settlers and their agents. Why then did “Uganda” struggle for independence from the British Empire? Why did we not simply accept to “integrate” with the rest of the empire that had abducted us?

Buganda helped the UPC ascend to government at independence. The subsequent 1966 betrayal fuelled the radical nationalism that consumed the second UPC regime. The NRM leaders are also where they now are through Buganda’s help. They will have to be very mindful of that history if they are to survive their own continued betrayal. Further broken promises will only mean further strife and instability for the country.