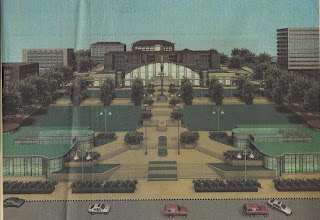 The Constitutional Square re-development project which never was - courtesy of Hon. Bidandi Ssali.

The New Vision, Friday, September 28, 2001 - published the impression of The Constitutional Square re - development project which never was. Hon. Jaberi Bidandi Ssali is credited to have come out openly and said NO to the de - development effort. It was nor easy given the standing of the promoter - Hassan Bassajjabalaba, bur Bidandi prevailed. Hopefully Kampala City Council is in possession of the title to the Square.

The nascent People’s Progressive Party (PPP) held its first delegates conference last year at which its founder, Jaberi Bidandi Ssali, was named chairman. In a New Year letter addressed to Yoweri Museveni, the President’s former campaign manager and long-serving minister urges his former boss to “look at the ceiling with 1986 eyes.” Below is a slightly edited version of the letter.

On behalf of the membership and leadership of the People’s Progressive Party and on my own behalf, I extend to you our appreciation for what you have been able to do for the country in this year 2008, the third year of your 5th term in the office of President of Uganda.

A number of commendable achievements had been recorded, especially in the first three terms of your leadership save of course for the people of the north, especially the Acholi region, which experienced a glimpse of hope only for the first four months of your reign.

As we look yonder to 2009 Mr. President, we discern a course that may lead the country into storms and tempest which will be attributed to commissions and or omissions of your leadership. In the short run many of us see a troubled Uganda which is as chaotic as you found it 22 years ago and in fact much worse off in many respects.

Mr. President, many of us who have experienced the brunt of the various regimes since independence will give testimony to the fact that at no time in our history has corruption and nepotism reached the current despicable levels. The prevailing extreme poverty and suffering that have engulfed the people of Uganda are a direct consequence of these maladies over which you are presiding. What perplexes many Ugandans is the impunity with which Your Excellency seem to be condoning these vices.

Mr. President, one of these nights lie down on your bed, look at the ceiling with your 1986 eyes and look at a number of issues under your leadership today, including the Temangalo saga, the Shimoni or Nakasero land give-away, the rot in the roads construction contracts, the Kananathans of yesterday, the amendment to the Constitution in respect of term limits, the re-emergence of safe houses, the Kiboko squads, the source and cause of the Muslim wrangles which are now destined to once again produce two Muftis – one claimed to be appended to State House. The list is endless. What comes to your mind?

Your Excellency, one of the worst crimes committed under your leadership has been the tribalisation of the politics of Uganda, setting tribes and ethnic groups against each other and each being tethered to your whims for identity and salvation.

Give a few moments of thought about what is simmering between Bahororo and Bahima in Rukungiri and Kanungu, between Japadhola and Banyoli in Tororo, between the Bahima and the so-called Bairu in Ankole, between Maracha and Terego in West Nile, what your administration is fanning amongst the Baganda, Baluli and Banyala. All these ethnic groups had settled amicably together in harmony. Why do we now sow seeds of disharmony and most probably a violent future for our children? Why do we not learn lessons from our recent post-independence history?

We are in a multiparty dispensation. For the first time since independence, Buganda has become part of the mainstream national politics albeit after a great sacrifice evidenced by the hundreds of thousands of skulls found in the Luwero Triangle. The country had attained a stage where one could no longer hear of Mengo “alagidde” or the Cardinal, Archbishop or Mufti “agambye” in national elections. Why stir up animosity amongst the various ethnic groups comprising Buganda who have lived in harmony since the colonial times? How is it possible that Your Excellency could come out with a weird proposal of redrawing the boundaries between Buganda and Bunyoro? Why did we swine the late Idi Amin when he proposed the redrawing of the boundaries between Uganda, Kenya and Tanzania? What were the consequences?

New embers of cession are simmering in Busoga all because of your administration’s interference in the selection process of their Kyabazinga. Why should a military unit keep vigil on the premises where the election of Kyabazinga is purported to be held in spite of a court injunction? It is now held in Busoga that Your Excellency directed that the election of the Kyabazinga must be repeated! What has happened to the rule of law?

As you continue staring at the ceiling, recall the 1980 elections where you lost in Nyabushozi and I lost in Nakawa. What crimes did we apportion to the Muwanga government; constituency gerrymandering, falsification of results, harassing of voters and stuffing ballot boxes for the government sponsored candidates? You opted for arms and the bush. Now focus on the 2006 elections or even more recently the by-elections in Bukomansimbi, Kyadondo North and Sembabule. What accusations are being apportioned to your government? Intimidation, harassment and torture of voters by state agents, bribing of voters, using the Electoral Commission to rig for the NRM! Wear the shoes of the declared losers and compare them with the ones you put on in 1980. What do you fathom? Or do you?

Ever since the start of negotiations with Kony, the people of Uganda, especially the affected areas of the north, have had a positive lull which even encouraged the people in camps to start returning to their villages. Now out of the blue you attack Kony and there is a resurgence of reported killings and abductions. Once again the people of the north are gripped with fear and apprehension. Some are even contemplating returning to camps!

Over 20 years of military confrontation with Kony only created more and more camps, suffering and death of thousands of Ugandans, with over one million people displaced from their homes. After three years of negotiations we saw closure of some camps and rays of hope for the people in that area. Why the attack on the flimsy ground of Kony refusing to sign the Peace Agreement and not on ground of his having resurrected atrocities in the north?

His Excellency Joachim Chissano while briefing the UN Security Council, is reported to have placed the responsibility of Kony’s refusal to sign the agreement on the ICC’s continued wielding of its indictment over the head of Kony. Yet there have been no concerted effort on your part to factor in the ICC indictment of Kony as part of your effort to convince him to sign the agreement.

Let us imagine that Kony is finally netted and probably killed, what lessons do we draw from the killing of Saddam Hussein in Iraq by George W. Bush and Tony Blair to which you appended your thumb? Where is peace in that country since then and how many Iraqis have died and continue to die? Your Excellency, will it be far fetched to discern a replica in Uganda after killing Kony?

Mr. President, the people of Uganda are reeling from extreme poverty and misery every passing day. This is in spite of Bonnabagaggawale which is not backed by political will. Some of us have little doubt that the scheme is bound to follow the Entandikwa scheme fate.

Mr. President, your globalised effort in persuading foreign investors to come to Uganda is no doubt commendable. However, the same effort should be extended to encouraging and boosting the local investors not only because they have held the fort in very trying times, but also because the majority have no option of relocation as some have done, but to collapse which has been the fate of many. Besides, a stringent sieve must be applied through which Kananathan or Shimoni kind of investors can be left in the chaff.

We definitely commend Your Excellency and your government for the discovery of oil. We have no doubt that it could make a big contribution to our effort to better the lives of the people of Uganda. However, judging by what has been the effect of oil discovery in some other countries; a lot of apprehension is felt by many Ugandans. This is not helped by the extreme secrecy surrounding the country’s oil.

We strongly urge you to stop considering oil discovery in Uganda as a personal achievement but as a national one. We urge you further to initiate debate and extensive consultations involving all Ugandans, civil society organisations and Parliament to finally come up with a national policy on oil.

This must also be the approach if the country has to come up with a national policy on land which will take into account interests of all stake holders, including land owners, bibanja holders on customary, mailo, lease or institutional land. Your Excellency, I again urge you to develop a stance of finding solutions through consultations and negotiations. What can be construed as dictatorial or commanding approach will only estrange you from your colleagues and partners and create more disharmony in our society.

As we enter 2009, all of us people of Uganda, especially we the leaders captained by Your Excellency, must rededicate our responsibilities and obligations to our people and our country placed on our shoulders by our Constitution. Let us listen with our inner ears to the message of the founders of Uganda enshrined in our national anthem which is now sang as a ritual and not a conviction.

I wish Your Excellency and your family a happy new year!
Posted by williamkituuka.com at 11:54 PM