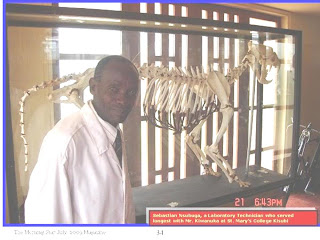 If you know ofany Old Boy of St. Mary's College Kisubi who was in Kisubi from the 1950's onwards; such a one must have benefited from the works of Sebastian Nsubuga who worked for not less than 60 years in the Biology Laboratory at the College. The distinguished gentleman is one of the unsang hero's of St.Mary's College Kisubi. All the mounted skeletons in the Biology laboratory were mounted by him. There is one dog which is alleged to have been at the Brothers'Residence; this dog it is said,the Brothers used to send it to the market to buy meat for them. It's skeleton was also mounted by the same man.talk of the carcass of a Tiger which was shot after it killed a man who was giving it food. This tiger was donated tothe school by Late Idi Amin after he visited the school and was impressed on seeing a number of mounted animal skeletons. Amin donated the dead tiger to the school, and Sebastian worked on it and mounted the skeleton which he is seen standing next to in the photograph. The tiger is in the Main Library at the College.

Sebastian; thanks for the work well done.
Posted by williamkituuka.com at 12:07 AM