In memory of the exemplary Dr. Wilson Bulega 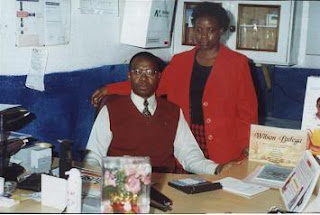 Dr. Bulega and wife at the Clinic at Seguku Trading Centre – 6miles Entebbe Highway where he proved a real professional doctor given the touch he had for the patients. His organized office is still in place but without him. He had a well organized library just in front of his work table which he could refer to as a serious professional would. 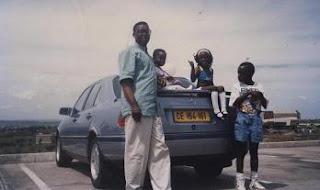 Dr. Bulega loved his family. On many occasions he tried to show love to his children and would spend precious time with them.
Dr. Bulega worked for International Rescue Committee – a critical global network of first responders, humanitarian relief workers, healthcare providers, educators, community leaders, activists, and volunteers. Working together, we provide access to safety, sanctuary, and sustainable change for millions of people whose lives have been shattered by violence and oppression. Founded in 1933, the IRC is a global leader in emergency relief, rehabilitation, protection of human rights, post-conflict development, resettlement services and advocacy for those uprooted or affected by violent conflict and oppression. 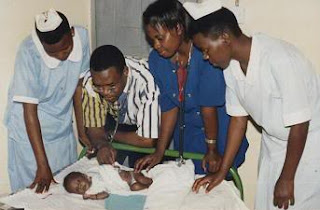 Dr. Bulega took a photo with the baby that had miraculously recovered after the treatment at the clinic under his guidance and supervision 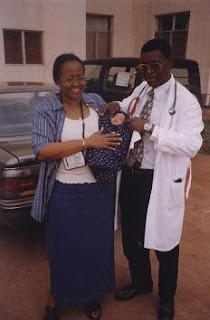 With the child's mother after successful treatment 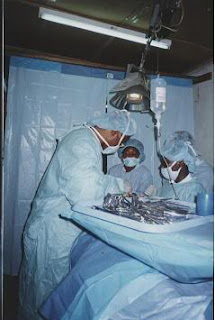 Dr. Bulega busy performing an operation "He was a doctor with a calling and as such loved patients and always went out of his way to bring them back to normal," says Dr. K. L. Matovu, one of his contemporaries. Bulega's friends say he had gotten saved four years ago, after which he lived as a complete physician -- he treated people physically and spiritually. Bulega went to Kitende Primary School , Kasasa Secondary School and Nyakasura School in Fort Portal , from where he left for Russia to do a degree in medicine. He specialised in surgery. He returned to Uganda in 1986 and did his internship at Mulago Hospital , after which he was posted to Lacor Hospital . He later went to Lesotho in 1991, where he worked as the hospital superintendent at Scot Hospital for one-and-a-half years.

On Congo border Dr. Bulega and some of our nurses ministering to pygmies. 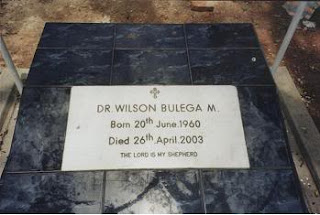 Dr. Wilson Musisi Bulega, 46, died at 4:00am on April 26, 2003 at Mulago hospital. The cause of death was identified as a ruptured heart and liver while waiting for an operation on a brain tumour. 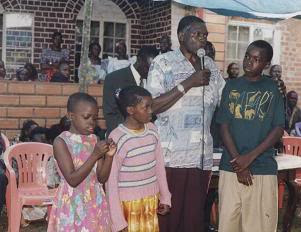 Dr. Bulega’s children on installation of the heir immediately after the burial
Dr. Bulega is survived by a widow, three children, Daudi, Oliver and Victoria who by then were by then 15; 10 and 8 years respectively .

Time runs very fast. It has come to my notice just today that April 26 2010 made 7 years since my good friend and a friend of many departed this world.Dr. Bulega, you were a friend indeed. may the Almighty God grant you eternal peace.

I came to know the late Doctor Bulega in 2001. It was shortly after a motor accident in which I was the only victim. We were taking a dead body to Gomba in Mpigi district. It was late in the night around 1.00 am. The driver of the pick-up who happened to be related to the deceased girl got dozing and the car got off the road (Masaka – Kampala Highway ) around Mpigi Town . I was ejected from the back and thrown by the road pavement, then, I feel in the ditch. Fortunately, the vehicle did not get serious damage so we continued on and delivered the body. However, I developed serious pains and the solution was to get me to Kampala and there I was at Dr. Mayanja’s Victoria Medical Services. The good doctor gave me good treatment and I went home. The treatment which followed gave me opportunity to interact with doctor Bulega. He did not only counsel me, but on many occasions gave me treatment without bothering whether I had any cash to pay!

It is no surprise that patients around Seguku hinterland found his clinic very convenient and relief. These had praises for the doctor as he proved good at handling operations in the theatre at Seguku as well as handling general medical cases.

There are good lessons we learn from the likes of Doctor Bulega. For them, it is excellence at work which promotes their image.. We should emulate the likes of people who are dedicated to their professional work and do it professionally throughout with a lot of ethics. For such people, there is no need to make campaigns as the output of their work speaks for itself. Dr. Bulega abandoned pride and esteem and went with members of his church to diagnose and treat patients in villages; and during then, he sacrificed comfort and was in the field serving mankind! These acts, the professionalism, concern and care for the needy, service before thinking about money, the love for the people all went far in promoting the doctor into the inner persons of those in Seguku hinterland community.

Death is a great thief. It robbed us of the most precious public good in for of a human being by the name of Dr Bulega. It is still hard to get to terms that the good doctor departed this world. He showed ethics in his work and left no time to himself as at all times he was ready to receive patients and he went a step further to train nursing assistants/aids who helped him with the work volume and indeed a number are in viable employment elsewhere. Dr. Bulega’s name had become a household name.


Dr. Bulega was buried at their ancestral home at Kitende 9 miles Entebbe Highway (those who go to St. Mary’s Kitende S.S) passby this burial ground just meters to the school. They share the same ground with the Late Lt. Kato Kiragga; the man believed to have implemented the plot that liquidated Major General Oyite Ojok.


I get short of words in describing the Late Dr. Bulega. The news of his demise was hard to believe, but given that he had been sick, it wasn’t a great shock. The love people had for him was testified at his burial, the crowd was clear testimony that his death was a real pain to many.


Great Physician Falls (From New Vision ( Uganda )
Byline: Juliet Kakeeto
THE medical profession has lost a distinguished member. He was a great physician many will continue to miss. He was a surgeon who loved his job more than money
"He was a doctor with a calling and as such loved patients and always went out of his way to bring them back to normal," says Dr. K. L. Matovu, one of his contemporaries. Bulega's friends say he had gotten saved four years ago, after which he lived as a complete physician -- he treated people physically and spiritually.

Bulega went to Kitende Primary School , Kasasa Secondary School and Nyakasura School in Fort Portal , from where he left for Russia to do a degree in medicine. He specialised in surgery.

He returned to Uganda in 1986 and did his internship at Mulago Hospital , after which he was posted to Lacor Hospital . He later went to Lesotho in 1991, where he worked as the hospital superintendent at Scot Hospital for one-and-a-half years.
Dr. Bulega in Rwanda after the genocide

He worked in Transkei shortly, and later joined Port Saint Johns hospital, as the superintendent in 1993 and thereafter worked in Medusa hospital, both in South Africa . In 1994, he joined the International Rescue Committee and was posted to Rwanda to handle genocide victims. He was later assigned to Kosovo in 1998 to handle war victims there.

Dr. Matovu says because of his bravery to work in war situations, at one time he was referred to as the Ugandan war doctor. After working in Kosovo, he had landed a deal to work as a consultant in London , but he changed his mind and returned to Uganda "to help his own people," says Pastor Jackson Molly of the Crusades International ministry, with whom the deceased worked as a preacher in different villages.

"Despite his busy schedule, Bulega found time to go with us in villages, preaching and treating the sick. We only had to buy medicine and Bulega would treat anybody who approached him for free. You could find him in his tent holding a filthy baby, trying to diagnose its illness, and you would envy his courage and love for his work," Pastor Stephen Mayanja, of Seguku Worship Centre, the deceased's church, said of Bulega. " Wilson was a great friend who was trustworthy, selfless, a loving father to his children and husband to his wife and a doctor who loved his profession," said Pastor Molly, who was one of the deceased's great friends.
Posted by williamkituuka.com at 1:49 AM