For Prof. Ephraim kamuntu to have fixed the Launching of Uganda's 5 year plan without Parliamentary approval is unfortunate. 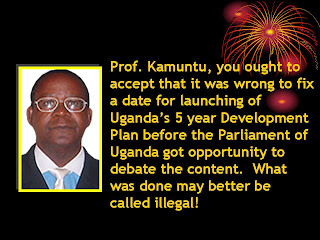 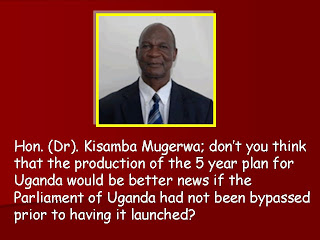 Prof. Ephraim Kamuntu Minister in Charge of Planning tried to defend the un-defendable Tuesday night 20, April 2010 while being hosted on KFM Radio Talk show from 7.00pm to 8.00pm. The Professor blamed FDC’s meeting when Dr. Kiiza Besigye was re-elected as President of the party; in that the day when the debate would have taken place id actually the same day when FDC called for the meet; hence giving Parliament no opportunity to debate the document prior to its being launched by the President!

The Professor is wrong because the law is very clear as to how the document would have been handled prior to the launch, in which case the fixing of a day prior to the debate was irregular as this should have been done after the Members of Parliament discussed the plan. This shows that the authors of the document feared the eventual outcome of the debate which could probably have thrown out some parts of the document. It is unfortunate that the launch was illegal.
William Kituuka

President Yoweri Museveni will today launch a shs50 trillion five year development plan for the country which is expected to address pressing issues like poverty and employment.

According to a statement from the ministry of Finance, Planning and Economic Development, the plan, "will contribute to the attainment of Uganda's vision of a 'transformed Ugandan society from a peasant to a modern and prosperous country within 30 years."
Currently, 31 per cent of Ugandans are living in poverty while according to the Uganda National Household Survey (UNHS) 2005/06, out of the total labour force of 10 million ugandans,14 per cent are unemployed or underemployed.

The new National Development Plan (NDP), which replaces the Poverty Eradication Action Plan (PEAP) will guide the country’s development plans over the next five years. It is themed “Growth, Employment and Socio-Economic Transformation for prosperity."

The PEAP was launched in 1997 and has been Uganda's guidebook to eradicating poverty for the past 13 years. It expired in June 2008.

Planning State Minister Prof. Ephraim Kamuntu says the new plan once properly impended would spar development. He adds that government will ensure that the plan is achieved by committing enough finances towards set goals. He revealed that over shs50 trillion will be invested to implement the plan over a the five year period.

The plan is also aimed at strengthening good governance and improving human security.

“In the new development plan, one of the challenges identified is improving the quality of our population by empowering the people and this is what we want to address,” said Prof. Kamuntu last week.

The NDP has been drawn by the Ministry Finance Planning and Economic Development and the National Planning Authority.

The plan will be unveiled at the Serena Conference Centre in Kampala.

Speaking at the launch of the five-year National Development Plan at Serena Hotel in Kampala yesterday, the President said human resource efficacy is key to the transformation of the country. The plan was formulated by the National Planning Authority (NPA).
The NPA board chairperson, Dr. Kisamba Mugerwa, however, missed the launch because he was stranded in the US due to the volcanic ash that has caused the cancellation of flights by several European countries.

"I have directed the Ministry of Public Service to tie contracts of public servants to outputs, in addition giving incentives to reward hard working civil servants especially scientists," Museveni said.
He said scientists should be retained so they do not go for greener pastures. "I am willing to bribe them to stay," Museveni said.

Under the plan, Uganda should be transformed from a peasant to a modern and prosperous country within 30 years. Sh54 trillion is needed to implement the plan.

Museveni said the document, which will be the planning framework, was being launched 40 years after the last one. "We had the idea of planning in 1986 but were told planning was out of date. We were told we needed to control inflation, ensure macro stability and leave the rest to the private sector."

He said to transform Uganda, power, roads, railway, training of human resources, market, liberal economic policies and promotion of the private sector were necessary.
He explained that Uganda's economy was doing well at 5.5% growth rate in the 1960s. This changed when the private sector was interrupted by Milton Obote's nationalisation of enterprises and the expulsion of Asians by Idi Amin in 1972.

Museveni cautioned donors against directing government on how to develop the country. "We invited development partners to feed into the plan so that they don't (direct). There's a plan here."

He said the Government now collects sh4000b, which enables it fund its activities with limited begging and borrowing. "We funded CHOGM although I hear some people were nibbling the money. The money is here. What we need is patriotism so we don't bargain every year," he emphasised.
The President said 2 billion barrels of oil had been discovered and an oil refinery would be constructed in western Uganda, and a pipeline from Eldoret to Kampala. He said roads will also be constructed and districts given road construction units.
He cautioned districts about failure to implement the works. "If you don't work on the roads the voters will throw you out. We shall also follow you, lock you up and it will be double jeopardy," he said to laughter.

Museveni said water transport will be improved on Lake Victoria and railways transport revamped to remove heavy cargo from the roads. Kampala will get a rapid bus system, he said.

He also said a review of the education system was needed so that the human resource is competitive.

The chairperson of the Africa Peer Review Mechanism, Prof. Adebayo Adedeji, said planning was the backbone of transformation. He warned against "guess-planning", recycling of old statistics and the culture of workshops. "A nation without a vision will perish," Adedeji, said.

"Not to plan is to fail. To plan is to choose to move forward."
Posted by williamkituuka.com at 11:57 PM