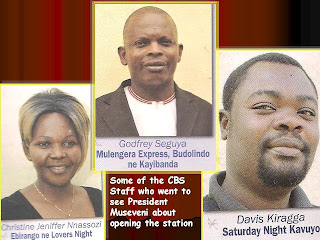 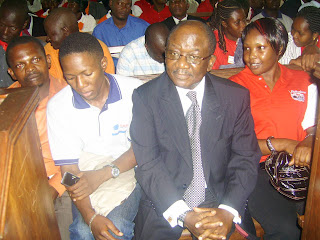 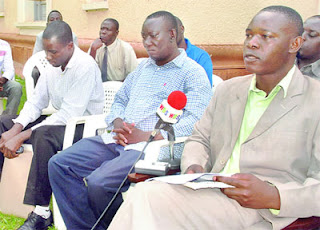 The CBS Staf who were unhappy with Seguya's move!


We must accept that the closure of CBS had become very controversial more so to the side of Government. If Kayibanda a no body at CBS FM radio station together with his delegation are going to turn smiles on the faces of many Ugandans, then let it be. It is not easy to have an appointment with President Museveni. Whoever played this game has solved a crucial jig saw. The authorities in Mengo will be free to say they did not plead with President Museveni to open the radio among other reasons being that accepting responsibility could easily mean that Government would at ease get part of what it is supposed to pay to Mengo to go and meet the losses due to riots. The side of the Presidency is also happy that at least some people wanted so much to see themselves back on job and decided to plead to have the station back on air, hence a win win situation to both parties.

The Questions raised are:
1) If the station is opened, will the staff who convened a meeting boycott work?
2) Given that some staff were unhappy, will it be sensible to have those who went to meet the President fired?
3) Will some shareholders withdraw their shares because of the move?

The sensible thing to do:
We need to accept that this matter is very controversial but the move by some staff of CBS to see the President was the only salvation and instead of criticizing them, we should just settle and see CBS foot the right direction in undertaking broadcasting. There can be very educative programmes on radio instead of promoting hatred with the central government. Let the politicians who are in the business of politicking do the propaganda but not CBS radio. Any person worth his salt should have the ability to choose a political destiny now not depending on CBS presenters.

To me Seguya is our hero.
William Kituuka

CBS MANAGEMENT DISSOCIATE SELF FROM MAKING ANY APOLOGY The management and staff of CBS fm radio have dissociated themselves from a group of employees who went to meet the president in state house at Entebbe over the radio’s closure early this week.

A group of employees including Davis Kiraga, Geoffrey Ndugga, Jennifer Christine Nassozi, Tamale Kkonde and Godfrey Sseguya aka Kayibanda went to state house to meet president Museveni with the help his Principal Private Secretary Amelia Kyambadde claiming to apologize to the president on behalf of other employees so that he can reopen the radio.

In a press conference held at the radio premises in Bulange, Mengo, the General Manager of the radio Kawooya Mwebe clarified that these employees were neither representing the management nor its other employees.

He stressed that the radio’s management is firm on its position with the case filed to the high court and respect the judge’s advice of settling the case out of court if the radio will be reopened.

Kawooya further stressed that as CBS management, they do not object to anyone meeting the president because it’s their right but meeting him on matters relating to the radio without their consent or that of all the employees is not acceptable.

The few employees who went to state house did not seek permission or inform the radio’s management or any of its other employees. This therefore means that they did it behind their employers’ backs. Kawooya added.

Kawooya maintained that these employees had their own agendas to fulfill because there is a respected committee led by Ex- Katikkiro Joseph Mulwanyamuli Ssemwogere which has on several occasions met the president over the reopening of CBS and therefore it did not necessitate any other person’s intervention into the same matter.
Posted by williamkituuka.com at 12:23 AM