The Face of Poverty in Uganda 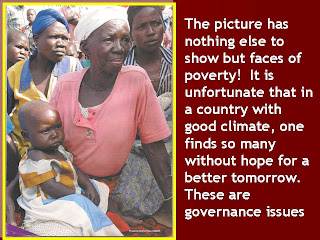 Poverty in Uganda
Poverty in Uganda is an important issue as an appreciable number of people in Uganda, specifically rural people are below the poverty line. About 60% of the Ugandan people are poor and 30% are very poor. Women in Uganda are the poorest of the poor. The standard of living in Uganda is much lower than the rest of the world. Uganda also have low life expectancy literacy rates.
Poverty in Uganda
Some of the major factors behind the poverty in Uganda are low income and low purchasing power of the people. Political and ideological factors should also be considered behind the emergence of poverty in Uganda. The attributes of poverty can be assorted on the basis of geography, urban or rural groups, vulnerable groups and minorities.
Uganda Poverty Eradication Action Plan (PEAP)
In 1997, the first PEAP ( Poverty Eradication Action Plan) was introduced with the objective to enhance the production, competitiveness and purchasing power of the people of Uganda. The second PEAP was introduced in the year 2000 and third in 2005. Some of the other objectives of PEAP are economic management, disaster management, maintaining security and human resource development etc.

Poverty Reduction Strategy Papers (PRSP)
Poverty Reduction Strategy Papers (PRSP) are normally devised through a participatory process to depict Uganda's macroeconomic, structural and social policies. PRSP are normally reviewed after every three years to ascertain and analyse the country's poverty situation. Strategies are taken to reduce poverty and enhance the purchasing power of the people of the country. Poverty Reduction Strategy Papers are the basis for getting assistance from World Bank and IMF (International Monetary Fund).
Government policies
It has been observed that the major factors responsible for the acute poverty in Uganda are gender division and lack of proper labor utilization( specifically in agricultural sector). Statistical data reveal that about 70% of agricultural labor force are responsible for the production of 70-80% of agricultural products and most of the labor force are women. Government of Uganda designed some plans for the welfare of disadvantaged groups, such as orphans, slum dwellers, war widows and laid-off civil servants. Government is also organizing some family planning campaign programmes to reduce the population growth and empower women in Uganda.
Posted by williamkituuka.com at 8:59 AM